Difference between revisions of "Nidarbot"

The first robot we built with Cerebot and LEGO pieces has two NXT motors connected directly to two wheels. The motors are driven through one HB2 PMOD. There is also a BlueTooth module connected to a serial port. The robot is powered from one 9V battery located at its bottom.

The robot runs nicely and reliably. The movements are sometimes not completely even, and this is due to the poor wheels - they tires probably need to be glued to avoid on the wheel center, or they need to be replaced for another type. Another important issue is to protect its cables and connectors. Even though they are placed on the back, the robot is vulnerable to attacks from the rear side. Pictures and/or videos coming later. Now we need to add sensors and more interesting functionality to this robot!

Robot was programmed in C using WinAVR and Procyon AVRlib. The whole project can be downloaded here.

Click here to see more pictures and a video. 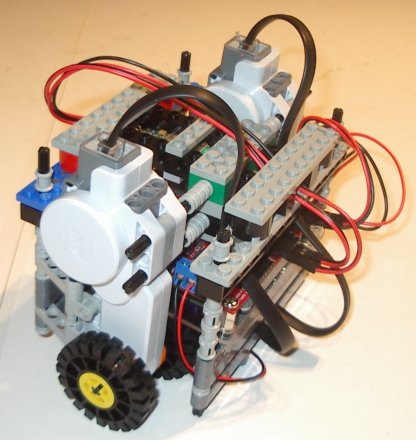