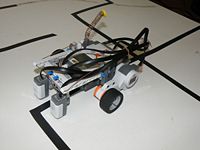 Software Design: There is a main loop in which the robot analyzes its current state and decides where to move. Basically, one of the sensors always acts like simple line follower, which bounces off the right side of the line. The second sensor which is mounted on the right is used to detect right turns. The algorithm used for movement in the maze is very simple, basically, the robot goes forward all the time, except for when there is a right turn. This way, it eventually gets out of the maze.
Problems we encountered: The biggest problem we had during our work was the sometimes inaccurate readings we were getting from the sensors, mainly because of the light in the room and the sensors' relative position to the floor. The second problem we had was speed. Unfortunately we could not make the robot go faster, because of errors that occured when we tried to set a higher speed.
Possibility for improvement : One possible step further would be making the robot learn the maze in the first run, and detect the deadends, so on the second run, it could avoid them. A whole different aproach would be to learn the whole maze on the first run, compute the shortest possible way using some algorithm (algorithm of Djikstra for example) and then on the second run, just follow the predifined path. However, this idea proved to be way too ambitious for such a short period of time, so we decided to abandon it completelly.