If you guess the robot word has origin in USA or Japan, you are very wrong. The word is comming from slavic languages where work ís "robota", worker "robotnik" and according slavic gramatics (particulary from Czech language, but the same construction is valid for other slavic languages too) it is possible to create a word which means something like "non-living (artificial) worker" - "robot". The first time it was used in a small village Trencianske Teplice in Slovakia, thanks to czech doctor Antonin Capek, who worked in the local spa from 1910 in hospital Poniatowski and anually called whole his family to spent summer at this wonderful place. Thus it happened that his son Karel Capek - a well known writer and dramatist - came there also at begin of summer 1919. He was keeping an idea for a new drama in his mind, later known as R.U.R. in which the main role was played by humanoid creatures artificially created by men. When he met his brother - a painter and writer Jozef Capek - whom all Slovakians know as an author of Stories about a Little Dog and a Little Cat - he explain him the idea briefly. Hereby he mentioned that he had no good name for such the creature; so far he concerned name "labour" (from english), but it was not good enough in his opinion. By return his brother replied: "So call it robot" (i.e. make the same derivation in Czech instead of English). And it was decided. R.U.R. has become well known and through Hradec Kralove, Praha and New York it was disseminated in the whole world. An approximate place in Trencianske Teplice where the robot word has born is labelled by memorial tablet at hotel Pax (as Poniatowski building was destroyed and the new hotel Pax was build at the same place). 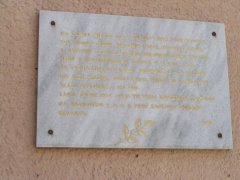