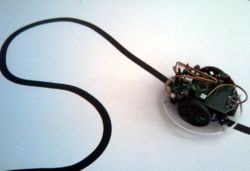 Our goal is to make Sbot learn to follow line. There are some algorithms to do that, but we'll focus on Reinforcement learning algorithm.

Sbot has three sensors (we added one sensor for our purposes), from which we can obtain an information about intensity of reflected light. In our environment line is black while background is white, so we can reduce these information from sensors into two states - "on line" and "out of line". Measurements from two border sensors are inputs, which RL algorithm will use to decide, which action from set of actions it has to make and middle sensor is used to provide reinforcement. Set of actions consists of these three actions: moreLeft, moreRight and balance. So there are 12 different rules (if condition then action) that can be constructed. We have 4 different conditions (2 inputs, each can be in two states), so there are 81 (3^4) different policies, from which we will try to find the best one. Each of 12 rules will have assigned a weight (or quality) and RL algorithm will make some corrections of these weights, based on reward, which Sbot get from previous action. In the end of training, the best rules will be those with the highest weights.

Before programming, we have to choose the way, how Sbot will get a reward. We have these options:

The last option seems to be the simpliest one, so we will use it in our project.

Well-known problem in reinforcement learning is the exploration vs. exploitation trade-off. In our program, we select random action with probability <math>p</math> which is compute as follows:

where <math>p_{min}</math> is constant and means minimal probability of selection of random action; <math>r_i</math> is reward given i-steps back; <math>w</math> is size of time window and <math>r_{max}</math> is the highest possible sum of rewards for last <math>w</math> steps.

If probability p is greater than a random value between 0 and 1, random action will be chosen. Otherwise, we'll select a new action stochastically, from the rules with actual state in condition.

After action is performed, we take measurement from middle sensor, compute reward and save it into the array of last w rewards (of course, the oldest reward is replaced). Then we have to update weights of rules. If reward was 1, weight will be updated by formula:

where <math>\alpha</math> is constant (in our program set to 0.2). If given reward was 0, weight will be updated according state where last action lead. If it's good state, last used rule was good too, although didn't get reward. So weight is updated by formula:

We wait after each update 80 ms, so the sbot will produce cca. 10 actions per second.

Note that actions left and right stop one wheel while other is running. Result is, that robot moves forward while turn left or right, too. So we needn't compute reward with respect to robot's last actions.

Robot learns only if state is changed. This is important for correct learning process. Otherwise we can get different results from sensors in the same state, sbot is confused and learning is inefficient.