Imagine your family is traveling with a train from city A to city C, but the train passes through city B on the way (without stopping). The tracks were reconstructed between B and C, so the train can travel much faster between those cities. By a coincidence, the distance from A to B is the same as from B to C. We are going to measure the time it takes to travel both parts, calculate velocities on both segments, and then estimate the average speed based on the two speeds. At the first sight, since the distances are the same, it may look like we obtain the average velocity simply by averaging the two velocities, i.e. (v1 + v2) / 2. However, the average velocity can clearly be calculated by dividing the total distance by the total time. In this exercise we will compare the two values - we they be the same? 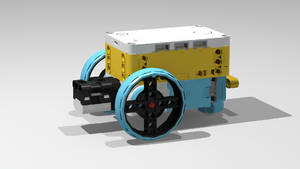 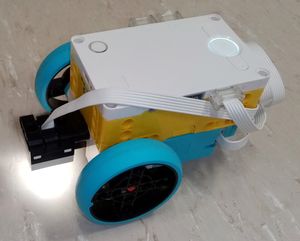 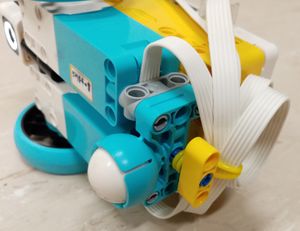 Prepare your track - use a black tape to mark the locations of the cities A, B, and C with a black line on the floor perpendicular to the "train" movement. Use a measuring tape to make sure that the distance from A to B is the same as the distance from B to C. We have used 100 cm. If you use a different distance, consider changing the program to see the velocities in easy to understand units (cm/s).

In the second part, it calculates the velocities v1, and v2, and shows on its display the average of the two values v1 and v2, and also the average speed calculated by dividing the total distance by total time. 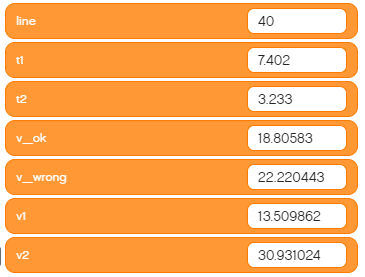