When you lift and spin a wheel of a bicycle, it will continue rotating for quite a while, large portion of its mass is distributed on its circumference. Would it be rotating for the same duration if its mass would be placed more close to the center of rotation? In this exercise, we will try to find out. 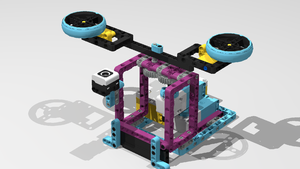 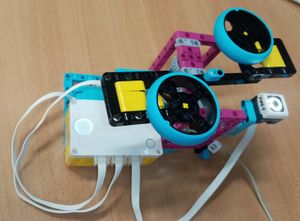 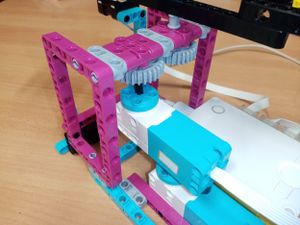 The model has two motors: the upper motor has the purpose to set the freely rotating part into rotation. The role of the bottom motor is to automatically connect and disconnect the gears so that the rotating part will only continue the rotation due to its inertia after it has been speeded up. The yellow bricks at the top are reflecting light of the color sensor very well and thus the system can determine, whether the rotation has seized or still takes place. The wheels, representing the weight, can be inserted at several different positions at the arms. However, remember to always place them in symmetric positions so that the whole rotating part is balanced and doesn't waggle. 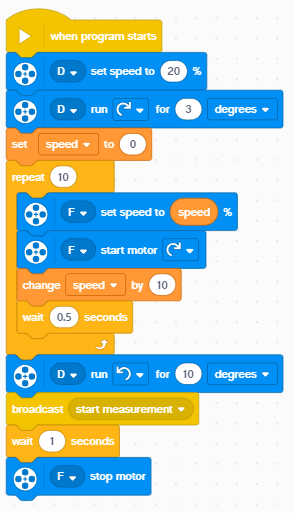 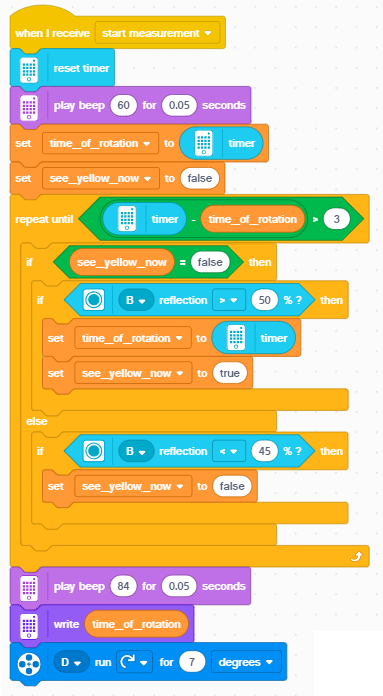 The program is using the variable speed to accelerate slowly to avoid gear teeth to beat each other. When starting the program, the two motors are aligned. After the full speed is reached, the upper motor is disconnected by turning the bottom motor slightly. The sensor then starts to permanently look for changes of reflection detected by the sensor. As soon as there comes no change in three consecutive seconds, the rotation is considered to have seized, and the timer value of the last time the reflection onset was detected is reported in the time_of_rotation variable, and it is shown on the display.